The Truth of war Project Reflection

Throughout the course of this project, we have learned a lot about war and America's involvement in them. We started by looking at different forms of government and their varying levels of success. The main three we looked at were Socialism, Communism, and capitalism. Then we looked at countries that had been the most prominent countries with these governments and how their economy and overall countries welfare were. Then we looked at the cold war and how it began and what happened during this time period. We talked about how America was afraid of the communist and the Red Scare time period. Then we started to look into the Vietnam War, This is where we spent most of our time, We watched a documentary series that gave us a timeline of the Vietnam war. This includes the Gulf Of Tonkin Incident and smaller events all throughout the course of the war. The most effective method of learning about the war was through an interview with a Vietnam veteran. It was so interesting hearing his point of view from the war and how he was received when he returned to the States. He had pictures that he had taken from the war and we talked about all of them and situations he was in while he was overseas. Overall through this project, we looked at wars based on government disagreements and we looked at how these wars affected the people that were in the war and families and friends at home.


To show our learning we created an exhibition that showed many aspects of the war. We did this by breaking into six groups, each with the goal of designing a room that showed their specific room overview. I was in the Living Room group, our rooms purpose was to show how American families were affected by the Vietnam war. We were also the first room to come into so we had to set the scene and mood for the rest of the exhibition. To achieve this goal we set up a house scene with a dining room where a son is talking to his dad about his older brother who has been sent to Vietnam to be a foot soldier. We discussed how the war was started and why the oldest son had to fight in the war. The father then moved to a living room scene where he and his wife discussed that there were many things that they did not know about the war. To finish our room we had a few primary source documents, these included letters between Ho Chi Minh and U.S. Presidents. We highlighted key points in the article to really show how much they didn't know about the war at the time.


During this project, I had a few skills that I learned I need to improve but there were also a few that I did improve upon. Starting with where I improved, for our groups we needed a lightning rod, this person would be the one who helped keep people on task and working on their part of the project. I stepped up and took this position and for the most part, I did my job, I would step in and take the jobs that no one else wanted. When people were not working I would do my best to get them back on task. However, there were times where I was not working as much as I should have been. I have always struggled with working on group projects, but in a project like this one, it was nice having other people because we had someone who was good at every job we needed. Next big project like this there are a few things that I think I could improve upon. One of the biggest things was that I strayed away from doing any group oriented work, every part I worked on was a one person job and I need to be able to work effectively with other people. It's the same situation for group discussions, I only add in when I feel that there is something that I don't agree with or I feel could use some more refinement.


There are many ways that this project changed my thinking. I think the thing that changed my thinking the most was having those interviews with the veterans. Hearing their perspective and their stories were really touching. I also heard some things that I would never have expected from the war, you hear about the more mellow traps but I would never have imagined that they used children as bait. Another thing that I heard that really made me think is that in war truth is the first thing to die. It made me think differently about going about this project. There is still some importance in finding the truth though, one of these being how much the government really tells us about why and how we got involved in wars. Something that I will take away from this project is that there are many things in war that we will never know and there are many that we may not want to know. Throughout this project many of my views on war have changed, some are for it and others are against it.

The living room portion of our room 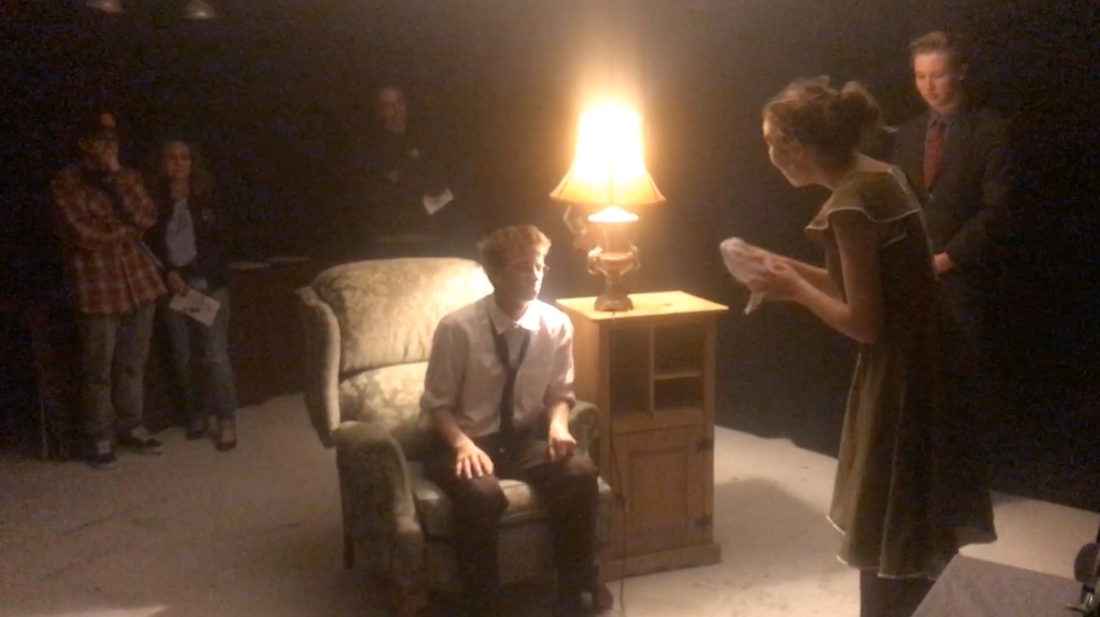